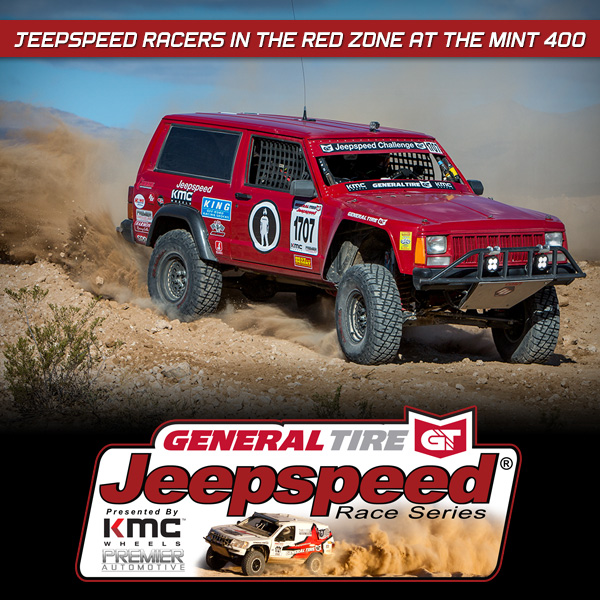 Las Vegas, NV You didn’t have to race a red Jeepspeed at The Mint 400, but it must not have hurt. Both the Jeepspeed Challenge and Jeepspeed Outlaws winners in the General Tire Jeepspeed series presented by KMC Wheels and Premiere Automotive were cloaked in red paint. During the race, the trucks were in the red zone from the drop of the green flag. An intense battle took place on the course for the prestige of winning the Mint. The Mint 400 is a celebration of off-road racing. A long list of special events take place that honor the legacy of the original race and expose desert racing to the masses. The week kicks off with a race truck parade down the Las Vegas strip for the fans. There are numerous parties, a Miss Mint contest, and a huge turnout on Fremont Street for contingency. Rugged Radios, who has come on-board as the official communications supplier to the Jeepspeed series, held a meet and greet that drew tons of fans for a chance to get autographs from the racers. 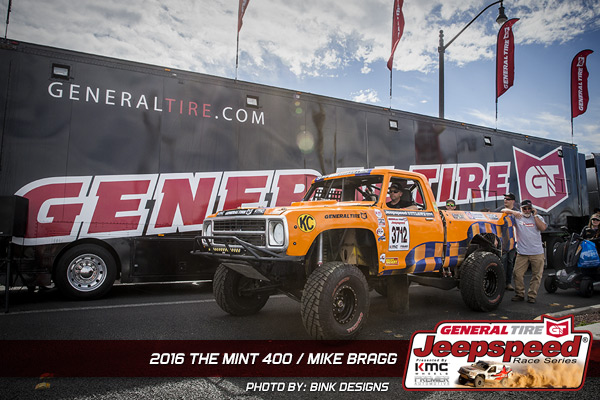 There was a truck show that saw Rick Randall taking a prize for his Jeepspeed 1700 Cherokee. Randall’s Jeep was also on display later at contingency. Stu Miller’s 1776 Cherokee was also on display, out front at the General Tire booth. The attention to detail and careful preparation on many of the trucks makes them show worthy and is paying off on the race course as well. There was a good showing of Jeepspeed Challenge trucks and Class 3700 Jeepspeed Outlaws, 19 in total. Smittybilt kicked it up a notch with an extra $500 cash bonus for the winners in both classes. This extra cash bonus will be put up at every race by a different sponsor to the series. Those sponsors include General Tire, KMC Wheels, Premier Chrysler Jeep of Placentia, T&J Performance, Rock Krawler, Synergy, Currie Enterprises, G2 Axle & Gear, Howe Performance, KC Hilites, King Shocks, Rubicon Express, SmittyBilt, and Rugged Radios. 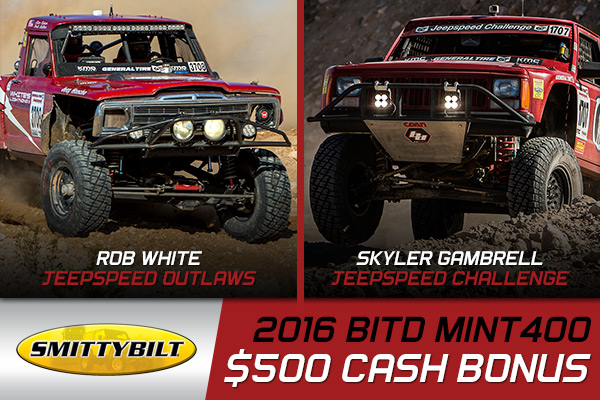 The course ran in the opposite direction than in previous years; making the bumps square edged and harsh. After a short infield section and a slow, 25 mph crawl across the power station bridge, the trucks hammered uphill through the loose rocky terrain. As the laps went by more and more rocks were pulled up or rolled into the racing line. Lap two took its toll on many including defending champ Rick Randall who kicked the rods out of his engine. Brian Davidson was hauling in his Jeep JK; he led for most of lap one until he broke a rear axle. Unfortunately, he was unable to remove the broken pieces to make repairs, despite help from other competitors who pitched in to get him back out. 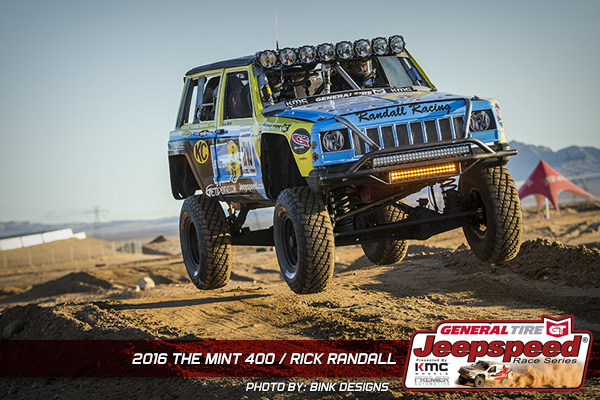 With Davidson out, Eric Sigwig took the Outlaws class lead but he was also sidelined. Rob White emerged with the lead in the big red Jeep Honcho and took it to the finish despite a charge from second place finisher Jason Mack. Mack was taking back a minute from White at every check point driving his classic Cherokee with big V8 power. He sputtered across the finish line completely out of fuel. It took an hour to get the system primed again so he could take his rightful place on the podium.  Third place was Mike Bragg in his cool Dodge truck. The truck is a former class 8 that was sitting around the shop. Jeepspeed Outlaws rules are designed to get people out and having fun racing. Finishing in fourth place was Mike Shetler who was competing in his first Outlaws class race. 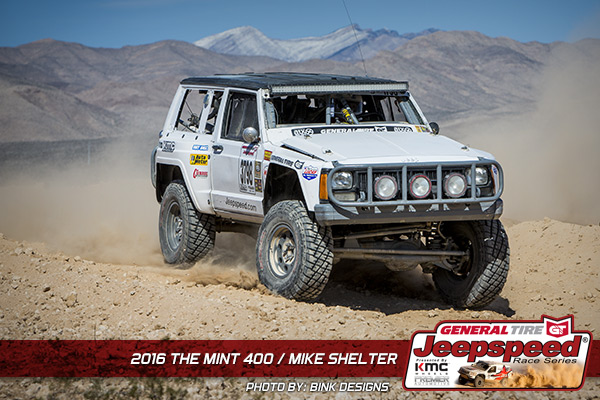 “It was great to see such a stacked field,” said Rob White, “We had high hopes that we could drive our way to the front, but knew there were a lot of awesome Jeeps to compete with! The course was awesome on the first lap with no dust. There were lots of break downs and guys needing a tow but we kept racing. We saw a buggy on their side so we helped pull them over. Fortunately, they were ready to go. It only cost us a few seconds and we didn’t lose any places. The Second lap was rough and dusty. We kept watching the rear view for anyone coming. We got a glimpse of Mack at one of the pits so we kept a frantic pace. The Honcho ran very solid; the best so far. Thanks to my co-pilot Alan Kaiser and pit crew for getting us to finish!  I’d also like to give a shout out to team Shetler and team Mattox for helping us this year.” 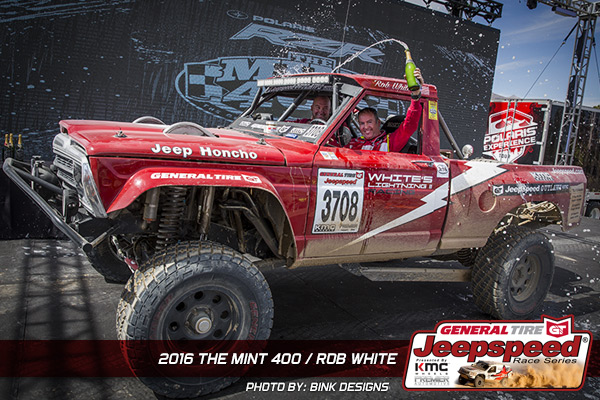 Second place Jason Mack got to the race early Friday morning with a case of sleep deprivation. They had worked on the Jeep until 3:30 am that morning, loaded up and drove straight to contingency. “We started the race at a very conservative pace,” said Mack, “Visibility was not the best while driving into the sun. We knew there were a lot of sharp rocks on the course. After pit B the sun was up and there was a slight breeze to move the dust away so we picked up the pace. We made it through timing tower at the finish and ran out of fuel. We couldn't have planned our fuel strategy any better; or maybe it was pure luck? All in all, we had a great time. The poor little Jeep took a beating but pulled through for us. As always, we thank Jeepspeed and all the sponsors for putting this together.” 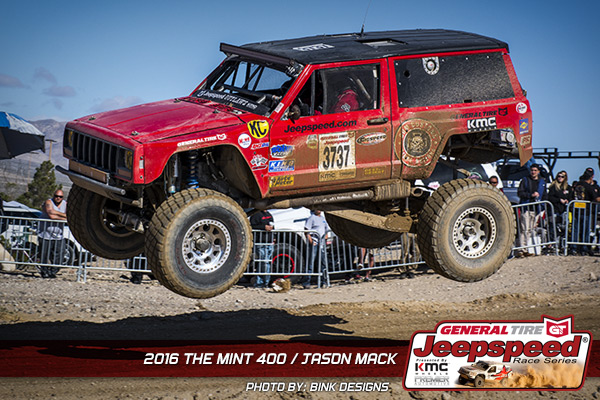 Third place Mike Bragg had almost zero test time on the Dodge truck before the race. “I drove the truck down to the mail box and back just to make sure the gears were meshing right,” said Bragg, “We followed Bunch (Billy Bunch) off the start and then got around him. We picked up the pace and then stopped to get fuel for the big motor. We were coming across the dry lake bed when our oil cooler started leaking. We got the leak fixed and pitted again to clean up the truck. The course was getting real choppy and very rough with lots of rocks. This was the first time we’ve raced this truck since the 1990’s. It was great to finish on the podium.” 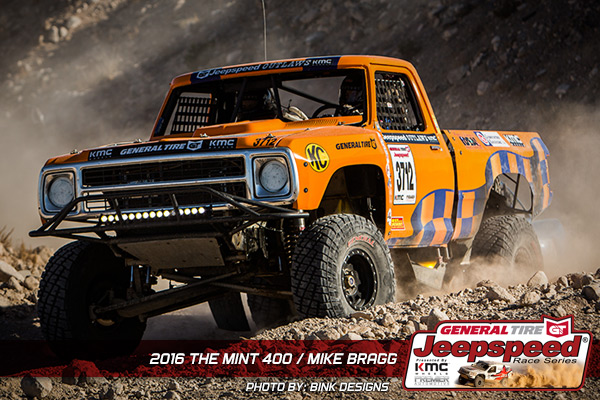 The first half of the race was bedlam in Jeepspeed Challenge with half a dozen 1700 trucks swapping the lead. By mile 72, it was Gambrell, Allred, Randall and Stu Miller nose to tail. After two laps, Skyler Gambrell brought the red Jeepspeed rental Cherokee home for his second straight Jeepspeed Challenge win this season. Skyler’s race team was comprised of himself, and his co-driver Ryan Sonnenberg. The comraderies found in the series are just as strong as the competition. “We didn’t have a crew so we were fueled in the pits by our competitors,” said Gambrell, “We started tenth and passed three trucks by mile ten; then I got impatient making a pass and got a flat tire from the rocks on the side of the course. This was our second win in a row with no issues. I found one tiny pinhole in the radiator. It proves you can race this series without a lot of money, you just have to race smart and have a little luck!” 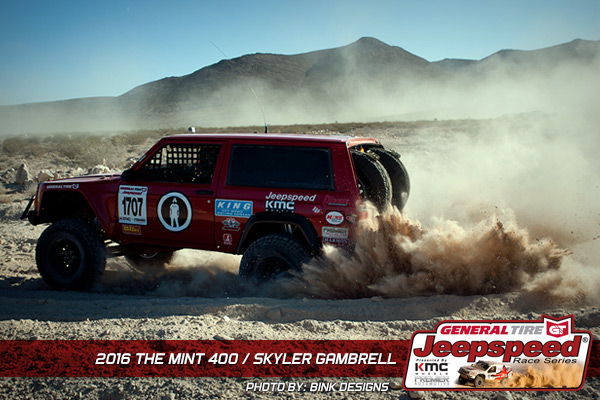 Second place in Jeepspeed Challenge was newcomer Mark Murrell who formerly competed in a stock VW class 11. “After ten years racing a stock bug, my strategy was to drive the Wrangler like the bug and not break anything,” said Murrell, “We had a fuel delivery issue at high RPMs which helped me to stick to that strategy. It was the only problem we had all day. I met a good number of my fellow Jeepspeed competitors; thanks for such a warm welcome to the Jeepspeed family.” Finishing on the podium in your first race is a pretty good start for Jeepspeed racer Mark Murrell! His second place finish at the Mint also puts him in the lead in the 2016 KMC Jeepspeed Wrangler Trophy series. 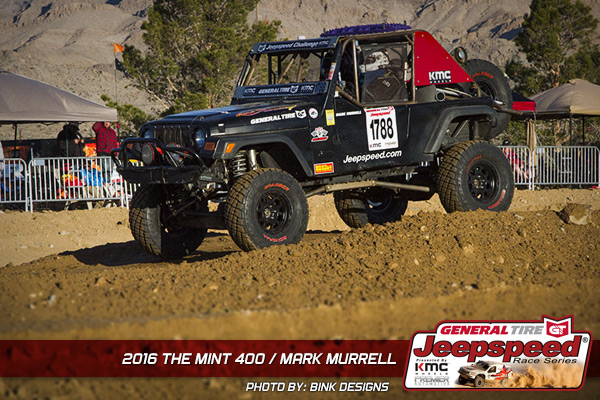 Third place finisher Justin Brinkerhoff had some challenges to overcome before and during the race. He had an issue with a new transmission so they pulled one from a friend’s Jeep before the race. 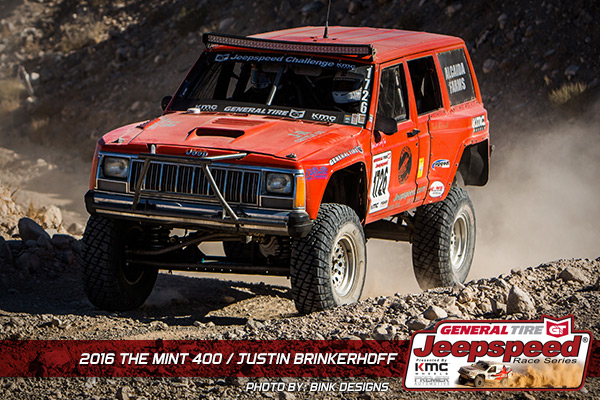 The last minute transmission was not up to the task. “The transmission got hot and the seals were failing,” said Brinkerhoff, “We limped into the next pit and the 1766 team gave us some fluid to keep us going until we could get to our own crew.” They were going along when they got rear-ended by a Trophy Truck so hard that Brinkerhoff was dazed. “After getting back underway, we kept dumping fluid into the transmission until we ran out. 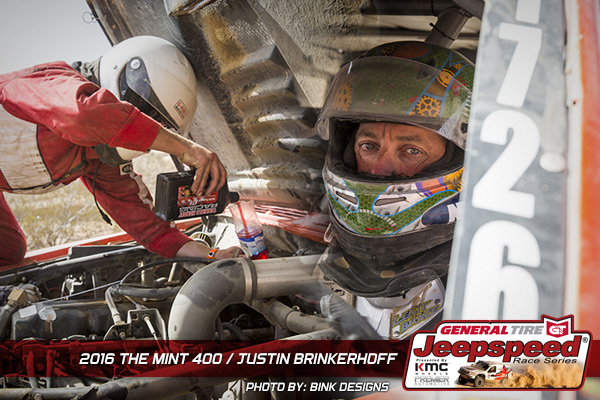 We then put motor oil in and somehow we got to the finish.”  Also credited with a finish was fourth place Tim Martin. The Mint was a super tough race. Congrats go out to all who finished and recognition to all who put in huge efforts but fell short. Randall and Martin had motor problems, Allred lost a transmission, Davidson and McKeehan had broken rear axles, Simonson smoked a wheel bearing, and several others were also spotted on trailers. 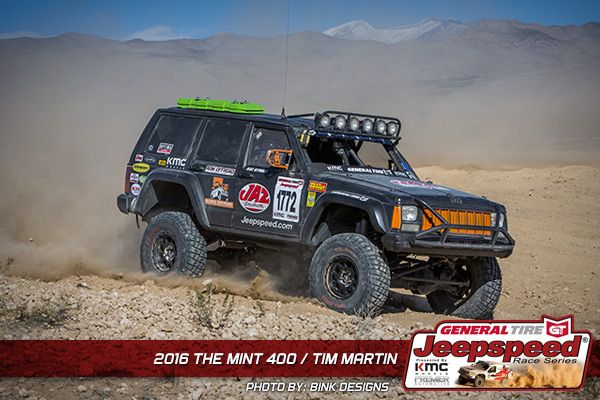 The Jeepspeed series has a long list of great competitors but sometimes, it’s the desert that wins. Jeepspeed has a class for everyone. The Jeepspeed Challenge class is a great way to get into racing without spending a fortune. Racing in the more unlimited Outlaws class has become so competitive that you have to go for it all day. The leaders are posting higher average speeds causing higher attrition rates. Their next challenge takes place in Laughlin, Nevada at the BITD Laughlin Desert Classic on May 5-8. It will be a heat race style event with racing on both Saturday and Sunday. 2016 Championship Points
Jeepspeed Outlaws      /  1. Mike Bragg (157 Points)           - 2. Jason Mack (156 Points)
Jeepspeed Challenge   /  1. Skyler Gambrell (176 Points)   - 2. Tim Martin (160 Points)
KMC Wrangler Trophy  /  1. Mark Murrell (80 Points)           - 2. Brian Davidson (45 Points) For information about the Jeepspeed racing series go to www.jeepspeed.com. There you will find additional info, deals on some attractively priced race Jeeps, Jeepspeed news, rules, forums, race results, videos and much more. Go to the Jeepspeed forum and you can read in-depth race reports from many of the Jeepspeed teams. Photography By: Bink Designs 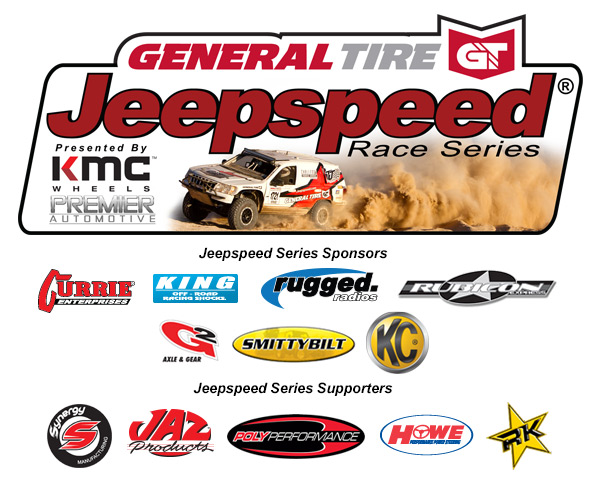