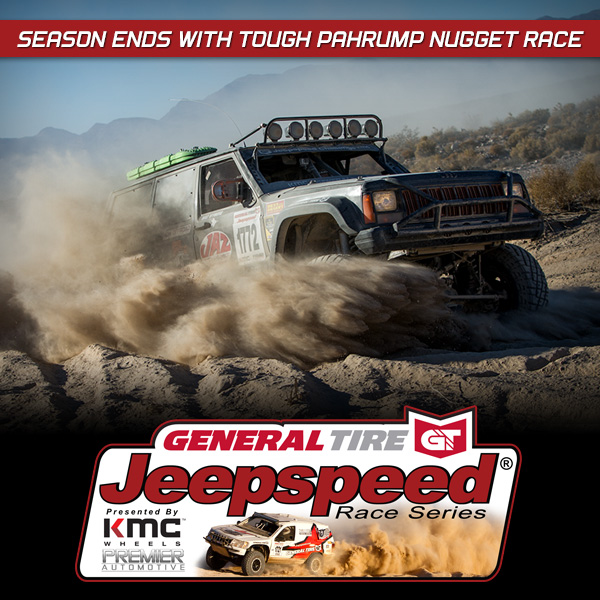 The General Tire Jeepspeed Racing Series Presented by KMC Wheels and Premier Automotive had one more test for competitors in 2016. At the Best In The Desert series Pahrump Nugget 250 race in Pahrump, Nevada, competitors would face an incredibly rocky course with some silt beds tossed in for good measure. A loop race that started just outside of town and finished in the parking lot of the Pahrump Nugget, the first 30 miles were basically a pile of rocks with dirt thrown in. Jeepspeed racers had to get through the rocks to start the race and then run through them again after hours of punishment out in the desert. 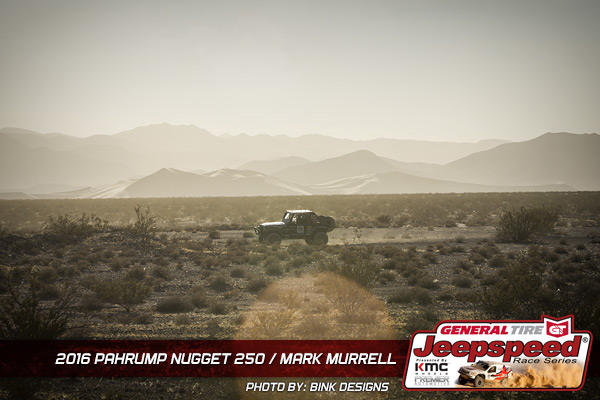 The season long points championships were mostly settled, but all the 2016 champions were racing; it gave them an opportunity to push harder and see what their trucks could withstand. In the Jeepspeed Challenge class, Skyler Gambrell took the title with 416 pts. Tim Martin was second with 397 pts. Garett Allred was third with 351 pts.


The Jeepspeed Outlaws championship was won by Mike Bragg who amassed 398 pts. Billy Bunch was second with 256 pts. Mike Shetler was third with 223 pts. Mike Shetler also picks up the 3750 subdivision Championship. Rookie of the Year is Mark Murrell with 235 pts. Second place in the rookie of the year chase was Ian Massey with 192 pts. and John Grewell third with 191 pts.

Jeepspeed Challenge champion Skyler Gambrell had an interesting season. He raced three entirely different vehicles on his way to the title. He began the season racing a Cherokee, then took advantage of Perry Coan’s generous offer to race his Wrangler, and share driving duties at Vegas to Reno, and finished the year at Pahrump in a Jeep WK Grand Cherokee.  It certainly showed the diversity of vehicles the Jeepspeed series allows and that each one is competitive. Unfortunately for Gambrell, fuel delivery issues on the newly constructed WK took him out in Pahrump.

“Winning the Mint 400 and Parker gave me a huge jump on the championship,” said Gambrell, “It completely changed my approach. I had to change from trying to be the fastest, to trying to be the smartest. I don’t even own a race truck, I was fortunate to drive Clive’s truck and then Jeff and Perry Coan stepped up and we ran a couple races in their Wrangler. I could not have run Vegas to Reno without Perry doing some of the driving. Most of the time, I didn’t even have a crew to pit me. Allred and others would dump fuel for me; the Jeepspeed community will always help out a fellow racer.” The Jeepspeed Challenge win in Pahrump went to Tim Martin. He had his brother along to co-drive with him. He hit a rock early on and had to stop to change a tire. Once back underway they had a pocket of clean air ahead of them. “It was like we had our own personal race course,” said Martin, “At pit 6 we were told that Allred was 20 minutes ahead of us so we thought, good for him, we won’t be able to catch him. We were surprised to see him on the side of the course; giving us the lead.” Martin ran clean to the finish; picking up the win. 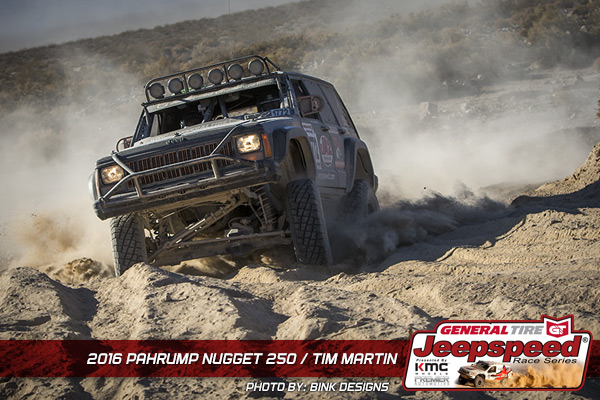 Mark Murrell finished the year strong with a second place at Pahrump and the Rookie of the Year title. 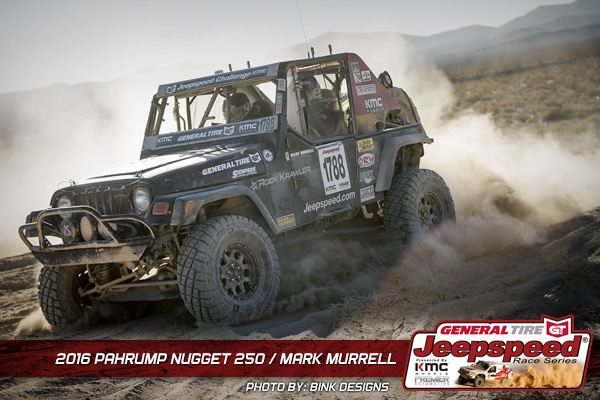 Garett Allred clinched his third place in the championship with a 4th place finish in the race. “It was the rockiest and siltiest course I’ve ever seen,” said Allred, “We got around Barnett and were in the lead when we started getting fuel cell foam in the system. It got past the filters and stuck in a couple injectors. After having a big lead, we were forced to watch everyone go past us; that’s racing. We limped in for the 4th place finish.” 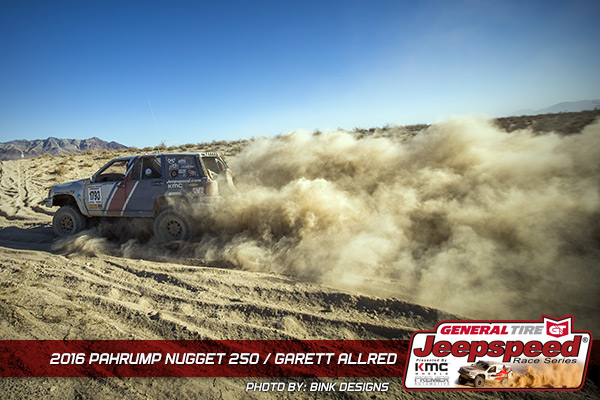 Mark Kammerlohr was riding shotgun with Mike Barnett driving to get a sense of the pace to run and to get a feel for his Jeep Wrangler. At pit 4 he would take over the wheel. “It was a blast,” said Kammerlohr, “We got high centered in a turn and had to dig ourselves out. I was not comfortable driving at Mike’s pace but we were going pretty good. We were drag racing with Murrell in a silty section, which felt great. After pit 6 we suddenly slumped down on one side. We had sheared the wheel studs off and lost the wheel and tire. We had to take the caliper off and limp it in to the finish. My son Clayton and I were so happy to make it to the finish in podium position. We are already getting the Jeep cleaned up for the first race in 2017 at Parker.” Mark, Clayton, and Mike, finished in third place. 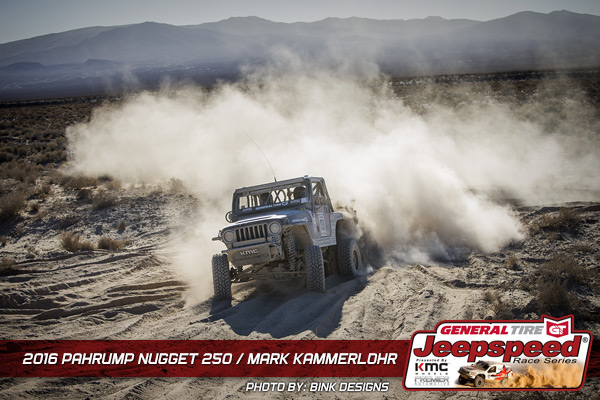 The Jeepspeed Outlaw winner in Pahrump was points champion Mike Bragg. They had another solid run in their big Dodge pick-up; a crowd favorite. A former class 8 truck, Bragg dusted it off and went racing in the Jeepspeed series. He was rewarded with a championship. “I did not have a chance to prerun the course but my brother did the first section,” said Bragg, “It was incredibly rocky. We had enough points over Billy Bunch for the championship so we could push a little harder this race. We took it easy in the rocks and got through fine so we picked it up a bit. We stopped in a couple of unscheduled pits just to take a look at the truck and to make sure everything was tight. The last 20 miles were the worst! It was a pile of rocks. We ran the new Grabber X3 tire from General and had no flats. We found a branch stuck through one of the tires that caused a slow leak but we got to the finish with no problems, the tire went flat overnight. We finished before dark so we didn’t get a chance to use our KC HiLites LED’s but we saw Jason Cobb at the finish line which made our day.” 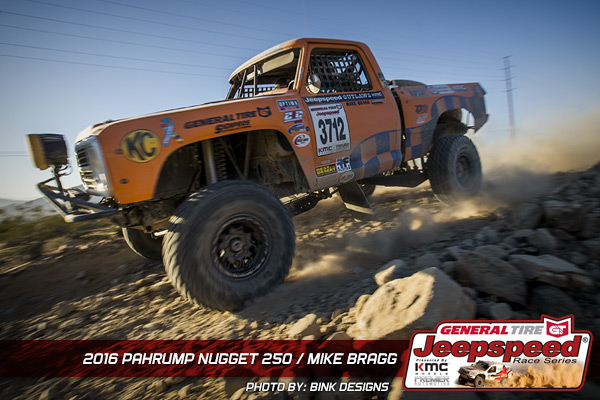 Second place was Steve Hearst who got his truck together at the last minute after he suffered a rollover at Vegas to Reno. “We had a couple of tough races before Pahrump so we wanted to run real conservative,” said Hearst, “Our pace really helped us because the course was so rough. Even in the silt beds there were rocks underneath. We had to punch it through a silt bed and cut two tires. We only had one spare and somewhere along the course we knocked the antennae off. We had to call our crew on my cellphone. We put the spare we had on and Best in the Desert brought us another one. We hung in there and just kept pushing towards the finish line.” Steve Hearst was very happy to make it to the finish in such brutal conditions. 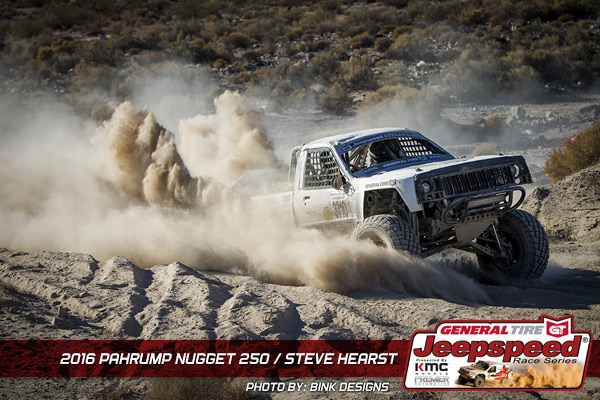 Third place in Jeepspeed Outlaws went to Mike Shetler. Shetler was racing at 110 percent all day. Before they got to pit one, the truck stalled on the course. Every time they would hit a bump, the truck would shut off. By the time they made it to pit one, they were already racing the clock to beat the cut off time. They suffered all the way to pit 3 where fellow Jeepspeed racer Tom Thorvick pitched in to help diagnose and replace the faulty coil that was causing the problem. Running at full song, they started to make up for lost time.  They had to replace the distributor cap and another coil but the near knock-out blow came when the hit a huge boulder in the silt that broke a knuckle on the front axle. They somehow put it together with a ratchet strap but lost the use of four wheel drive. Wounded, they still stopped to help extract a stuck Jeepspeed in a canyon but could not pull them out. They made it to pit 7 where Tom Thorvick started welding the knuckle together again only to be told the pit would close in 5 minutes. He only had time to tack it together before they left for the finish. They finally crossed the line with broken tack welds, broken ratchet strap and no brakes, but they made it. Casey Folks, Director of Best In The Desert, shook their hands and closed the door on the 2016 season as they drove across the podium. “We had the perfect plan for this race, but it went out the window,” said Shetler, “We are so happy to finish in Pahrump and to take the 3750 class championship. It was a long race for us but when the green light goes on, it’s like I’m 18 years old again. It was an awesome race, we had an awesome time, and we can’t wait until Parker. If you have ever contemplated racing in the desert there is no easier or cost effective way to join in on the fun than the Jeepspeed series. With simple, common sense rules that allow you to build your own vehicle if inclined and strong support from Jeepspeed sponsors General Tire, KMC Wheels, Premier Chrysler Jeep of Placentia, T&J Performance, Rock Krawler, Synergy, Poly Performance, Currie Enterprises, G2 Axle & Gear, Howe Performance, KC Hilites, King Shocks, Rubicon Express, SmittyBilt, and Rugged Radios, it makes it super easy to get started in racing. In addition to sponsor support of the series, bonuses have been offered throughout the season. For the Pahrump race, a $500 dollar bonus was paid to both Mike Bragg and Tim Martin courtesy of Action Sports Canopies. 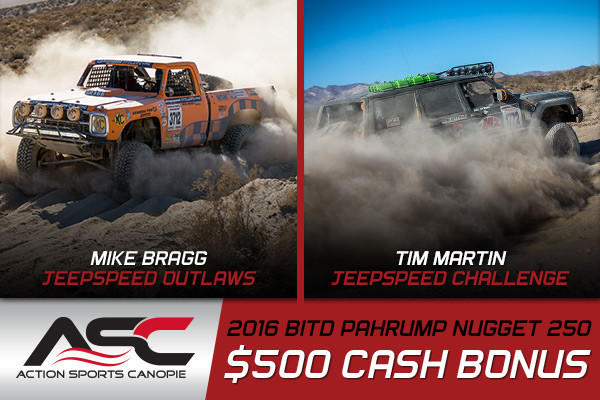 We invite all Jeepspeed family and fans to join us at our awards party on January 7th. The party is on Jeepspeed and Jeepspeed Sponsors; you just buy your own drinks. We are expecting a big turn out so let us know the number in your party asap. email This email address is being protected from spambots. You need JavaScript enabled to view it.. For information about the Jeepspeed racing series go to www.jeepspeed.com. There you will find additional info, deals on some attractively priced race Jeeps, Jeepspeed news, rules, forums, race results, videos and much more. Go to the Jeepspeed forum and you can read in-depth race reports from many of the Jeepspeed teams.