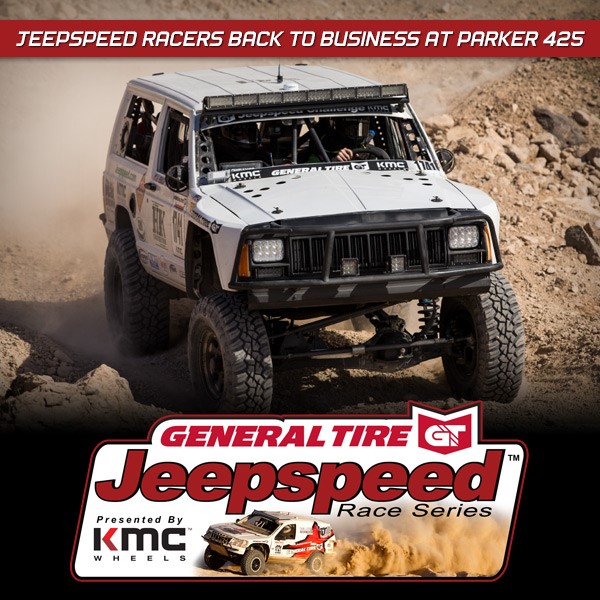 Parker, AZ With the Holiday’s behind them, Jeepspeed racers began the 2020 season by giving nothing to their rivals at the Best in the Desert series season opener in Parker, Arizona. It’s a new decade, and the Jeepspeed series reflected it with new trucks and new faces in the ranks. Some with fresh paint, and new parts did well. Others fell prey to the common foe; the parker 425 race course. Not only is it a long race at 425 miles, but the terrain includes just about every kind of obstacle that can break a race truck. It’s hard enough on lap one, but once the entire field has been through, the second and third laps get even worse. With average speeds continuing to climb, it makes for an incredible challenge, and great racing. Because of the class structure in the Jeepspeed series, the trucks are equally matched in each class. The rules are basic, and easy to understand despite having enough leeway so that competitors can build their own trucks if they like. Many that are new to racing choose the 1700 Jeepspeed Challenge class because it’s relatively inexpensive, and has generous prize money, and strong sponsor support. After learning the ropes in 1700, you can move up to a faster class like the defending champion Rob Seubert did this year. Another racer who got his start in the Jeepspeed 1700 class is Casey Currie. This year Casey became the first American driver ever to win the Dakar Rally. Racing in the Jeepspeed series teaches you the vital things you need to know no matter what or where you are racing. It took a couple attempts, but 1700 class winner Kyle Gieselmann finally tamed the Parker course. It was the first time he finished the race, and it resulted in a win! “We finally did it,” says Kyle. We got our first win and finished Parker. The new motor and all the little bugs we were fighting last season are finally gone; everything is running perfect. We got the luck of the draw starting first, and never looked back. It was a flawless race. I never got out of the jeep! Parker is definitely a hard course. Especially the "goat trail" on the backside, but we managed to just cruise right through that section thanks to our new suspension. Pit stops were flawless thanks to my team and everyone involved. We ended up with more than an hour lead on second place, and second overall for the 2-lap race! What a great way to start off the 2020 season. Our next race is Laughlin and we will be ready to play.” 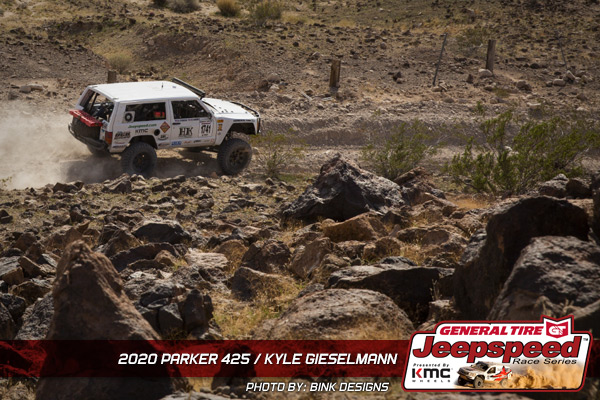 2nd place was Tyler Stone, and in 3rd was Jeff Garzik who had never raced Parker before. “The Parker start was fun,” said Garzik. “We were zooming down the road for a bit before turning onto the race course. The new transmission & shifter made a big difference. Our old shifter was "ghost shifting" during a race, jumping into a lower gear unexpectedly, and requiring a correcting up-shift. That's all fixed now. With the car running well, we had a largely trouble free day with Zero flat tires. I lost all braking ability a couple miles outside of Main Pit, but had no trouble getting back to Main pit where the brake line was fixed with an ingenious solution from Mr. Seubert senior. 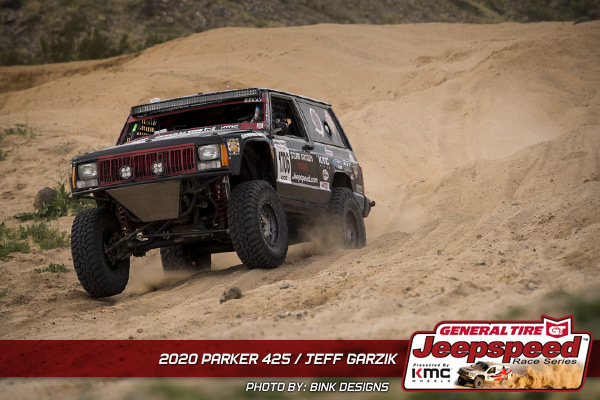 I hopped out of the car after completing a lap, and Ken & Adam Tichy hopped in to run the 2nd lap. The back side of the race course is pretty damn rough, but you just have to pick your way through it at the same speed that everyone else does. "That's why they call it a Jeep Trail I guess. We finished 3rd place; just 10 minutes out of 2nd. It’s my first trophy, and first podium. We ran the race we wanted to run, and had one or two "real" passes, which was fun. The 2nd lap got a bit competitive with 2nd place Tyler (#1722). We were only 10 minutes behind him.” 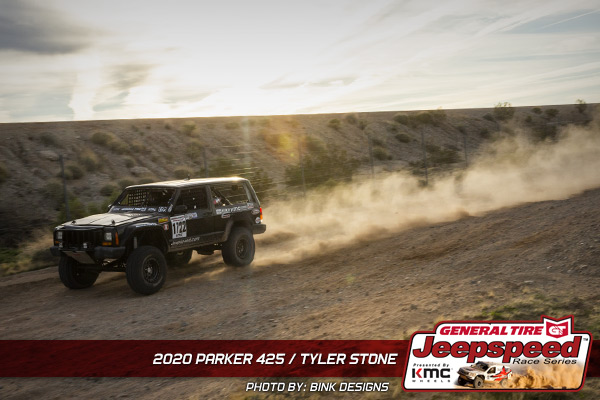 The Jeepspeed Cup Class 2700 Intermediate is open to any Jeep or Dodge with a production engine, and up to 35" tall tires. The winner in Parker, Skyler Gambrell, is always hard to beat. He is an accomplished truck builder and experienced driver. His competitors Mike Shetler, and Chris Clark both failed to finish. If not for some ingenuity on the course, Gambrell might have suffered the same fate. “I was excited to kick off the 2020 season at Parker. I had Erik Steinholt from Dynatrac along again as my co-driver. It was the first race with 35" tires on so I was looking forward to the deep ruts of Osborne Wash! We took the green flag on the streets of downtown Parker, and set off through the early morning sun and hazy dust! We made great time through the majority of the 1st lap keeping pace (somewhat) with the lead two 3700's, and were able to stay in front of the lead 1700's. In other words, exactly where I needed to be! At race mile 126, we had the studs fail on the rear axle. The wheel, rotor, and brakes decided they wanted to stay in the desert! We rounded up the random parts, and got on the radio to Jeepspeed Main Pit. With the help from Kammerlohr, and BITD retrieval, they got us some parts to scab Gomer back together! After about two hours of downtime, and with only 3 studs holding the driver side wheel on, I set off to main pit for a look over, and some fuel for Lap 2. Huge thanks to the other competitors in 2700, Wolfpack racing, Shetler, and Clark all pitched in to help! Thanks again, I couldn't race without the help from all you guys! On lap 2 we backed off the pace, and settled in for the long haul. I didn't want to over stress the 3 studs holding the wheel on, so we picked our way out to Pit #2. We had more help from Thomasson's team #3707. They splashed me a safety 5 gals of fuel, and we set back off. At about race mile 90 we lost all brakes, so the fast stuff to, and from Midway was slower. With the manual trans in Gomer, I was able to bang gears and keep my momentum! Finally, after a grueling 50 miles with no brakes, and a tired suspension, we crept through the Goat trail, and finally caught glimpse of the Colorado River. We crossed the finish line first in class after a long 9 hours in the desert! I’m looking forward to the short turn around to Laughlin for some short course racing at the end of Feb! See you all there!” 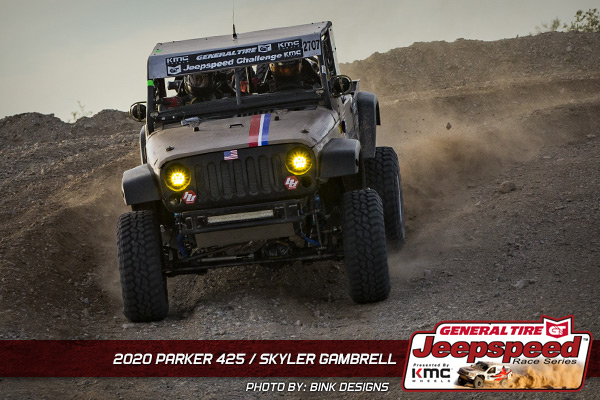 The next progressively faster class is the Jeepspeed Outlaws Class 3700 Modified. Rob White, Jimbo Piper, and Robert Thomasson finished in that order. Jerry Simonson suffered a DNF (Did not finish). Winner Rob White was raring to go. He had a brand new Chevy LS engine under the hood of his Jeep Honcho. “We started on the pole, and had less dust but the rising sun was in our eyes for the first hour of the race,” said Rob. (You can add that to the list of nasty surprises Mother Nature provided). “It was a challenging race, but we had a fairly trouble free race. We had an issue with an air lock during fueling, but we were able to get enough gas in the tank to finish. 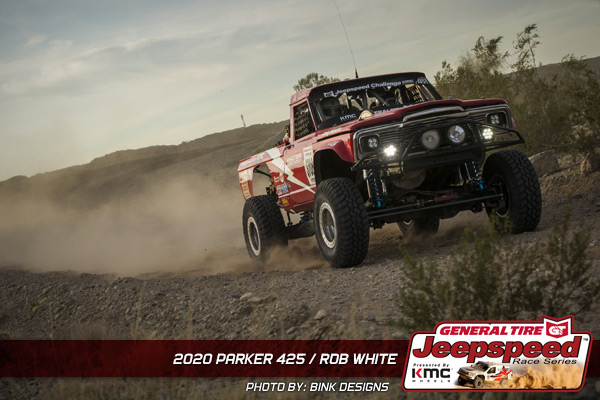 It was cool that we had 2 Honchos in the race. My plan was to drive fast, but to be smart, and keep it upright. We didn’t know it at the time, but we lost both mufflers. I wondered why it was so loud. Despite having helmets on, our ears are still ringing. We saw a lot of cars off the course with problems or rolled over. I got squirrelly in a whoop section, and was heading for a tree, but I gathered it up in time. The new engine is great. It feels like a totally new truck. It feels really solid; I think we have it dialed in. It was our third attempt racing Parker, the first time we finished, and we got the win.” 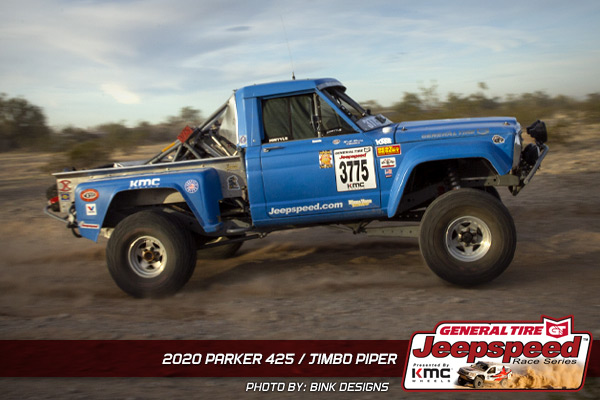 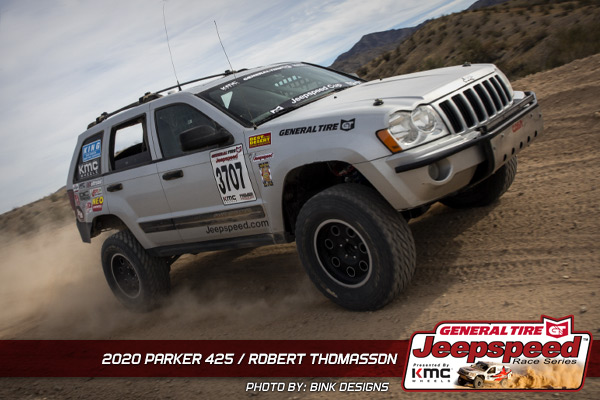 Jeepspeed Trophy Class 4700 Open is the class with the least restrictions. Vehicles in this class must be Jeep or Dodge sport utility vehicles and light trucks that are recognizable as a Jeep or Dodge by brand grill, hood and fenders. The larger wheelbase and engine limits allow several more recent models such as 4 Door Wranglers and Dodge trucks to participate. The 4700 winner is no stranger to Parker. Garett Allred has 3 wins there, and loves how rough the course is. He gives much of the credit to his General X3 tires that he says give him traction no matter what the terrain is. “It was our first win in the new truck,” said Allred. “We want to keep the ball rolling. This win feels great because we only had about 200 miles on the truck before the race. Our strategy was to push hard for the first 20 miles, and then set a pace we were comfortable with. There were so many twists and turns our steering pump got hot, but it was fine. My codriver Christian Michaels called a perfect race, and the crew killed it all day in the pits. They filled me with 50 gallons of gas every time using dump cans, and I was out in under a minute. They didn’t have to change any tires, we had no flats. We were really worried about Bunch/Archer getting the win, but I guess they ran out of gas.” 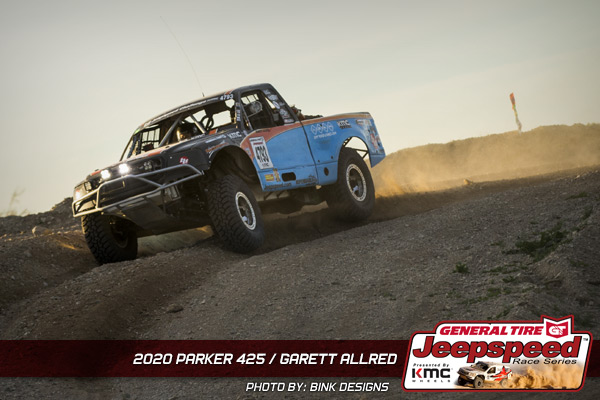 Rob Seubert finished second, and Andrew Hulse was third. Jesse Archer was in Baja mode, and forgot there is no outside assistance when he ran out of fuel. He got a 4 hour penalty which dropped him to 4th. Outside assistance is only allowed in Best in the Desert from fellow competitors, BITD officials, or when given permission by officials. All classes look to be super competitive this season, but the 4700 class will be especially hard fought. 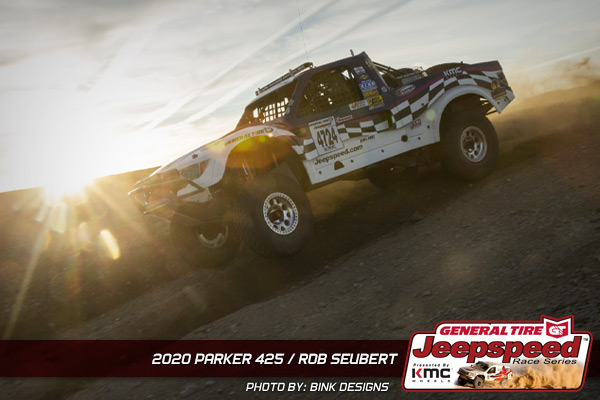 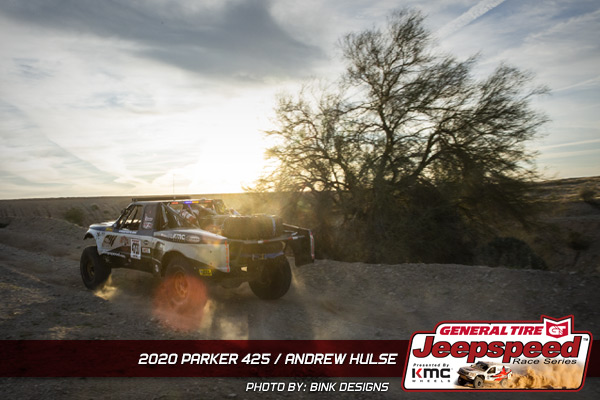 The racers only have a few weeks to get ready for the King Shocks Laughlin Desert Classic on Feb. 20-23. There they will race two consecutive days on the fast paced Laughlin short course. If you would like to learn more about Jeepspeed racing go to https://www.jeepspeed.com/ There you will find information about the series, and how you can get involved.