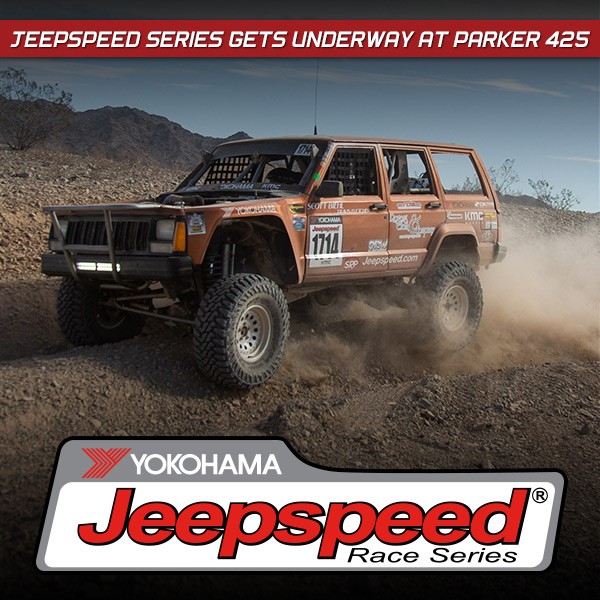 The 2022 Yokohama Jeepspeed series presented by KMC Wheels returned to Parker, Arizona for the traditional start of the racing season. Parker has typically been the location of the season opener, but this year’s event had a new twist. They would run the course backwards; something that has not been done for a very long time. Usually this means that the course will be rougher. The braking bumps in the corners, and the undulating bumps found in the loose dirt sections have a particular shape; curved on one side, and sharp on the other. It makes for a long, pounding race for the drivers, and their trucks. Mysteriously, it was found out to be the opposite. The course was surprisingly fast, and smooth; as smooth as a desert race course can be. It was still filled with rocks, ruts, and countless dangers waiting to take their toll. 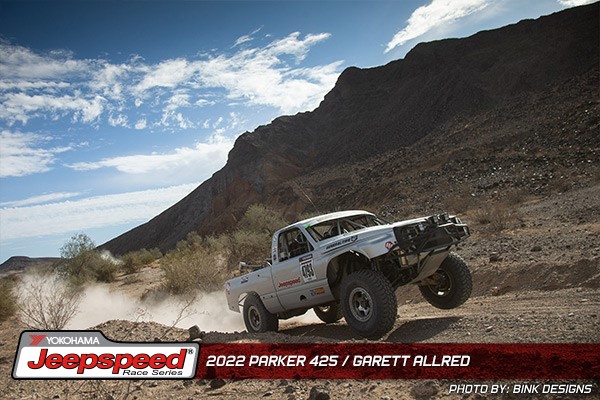 On the line was bragging rights, but also some incredible prizes from sponsors who love Jeepspeed racing just as much as the teams, and fans. Winners in each class would receive a set of wheels from KMC worth $1200 dollars, an LED light bar from GG Lighting valued at $550 dollars, a $200 dollar Rugged Radios gift pack, and an A/N wrench set from Fluid Flow Performance worth $250 dollars. That’s all in addition to prize money and contingency awards. In addition to the prizes up for grabs, the Jeepspeed series gets support from Yokohama Tire; Official tire and title sponsor, KMC Wheels; Official wheel and presenting sponsor, Jasper Racing Engines; Official powertrain, Rugged Radios; Official communications, GG Lighting; Official lighting EVO Mfg.; Official suspension, Action Sports Canopies; Official canopy, T&J Performance; Official builder, and Associate sponsors King Shocks, Currie Enterprises, and Fluid Flow Performance. The Jeepspeed series is the most fun racing series, it’s cost effective, and it’s worthwhile for grass roots drivers. You don’t need to be a millionaire to race Jeepspeed. Most teams build their own vehicles, and have pit crews made up of family, and friends. When a team needs help, their competitors pitch in to fill the void. The camaraderie is unlike any other racing series. It’s no wonder that the Yokohama Jeepspeed series is the longest running spec racing series in off road racing. 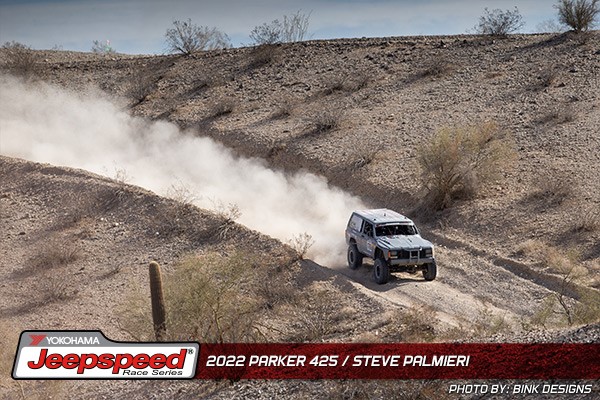 The Jeepspeed Challenge class is the most limited, but it’s also the most popular. Taking these Jeep trucks with off the shelf suspension kits around the course takes a lot of skill. They also challenge the crews as it’s common to do some trouble-shooting or repairs on race day. “The first race of the year started out with great expectations,” says Ken Tichy. “The school bus was prepped and ready. The plan was to add a long arm kit and Dana 44 in the front but the current supply issues got in the way so that will have to wait until Silver State. We were running strong, passed a 3700 on the graded road at around mile 40. All was good until we got into the deep wash area and we were passed by the 1776 and shortly after the 1714 (Both 4 wheel drive cars). At pit 2 around mile 70 stopped for fuel and the crew told us the driver side front shock mount was cracked. Our plan was to back off to 50% and try to make it to main pit to hopefully weld up the damage. About 10 miles past pit 2 the noise in the front started to get louder so we slowed even more and limped to Midway in search of a welder. We got out and accessed the damage and realized it was more than a pit repair could fix, so we were stuck at Midway until the course was cold and John could retrieve us with the trailer. Thanks to our pit support; John, Mark, Mike, Reid and the boys from the Wolfpack. The desert took its toll this time but we all lived to race another day.” Kyle Gieselmann also had problems, and was unable to finish. This left Scott Biehl, and Steve Palmieri to duke it out for the win. Scott was excited to race as his son would be co-driving in the car. He had some problems before the race even started. First the water main broke at his house, and then he had a fender bender with the motorhome in Parker when a woman pulled in front of him. They scrambled to make it to contingency in time. On race morning they had an issue on the starting line. Their fuel was the wrong color. They are supposed to run approved fuel which is clear 100 unleaded; his was blue. They filled their cans at the airport, and it is the wrong fuel to run. He wasn’t trying to cheat, he was trying to save money. “I tried to save $4 a gallon with AV gas,” said Scott. “I just forgot the rule, but rules are rules; we will probably get a penalty. Once we got in the truck and the green flag dropped, all my troubles went away. We caught 1776 at mile 5, we were on a mission. At mile 40 we caught a 3700 truck. We were bumper to bumper with Tichy in the sand wash. I clipped a tree so the hood was flapping. I turned the truck over to Travis Fletcher who said he was just going at prerunning pace, but I saw on the GPS he hit 97 miles per hour. The race started out horrible, but turned into a great day. We got to the checkered flag first; we are usually the one’s doing the chasing. My son Jacob got some good seat time navigating in the truck. It was his first full race. Riding in the truck will make him a better driver when he’s ready to take the wheel. He works on the truck, it’s not a free ride. He knows he’s lucky. None of his friends get to race. Since we got sponsored by El Centro Motors, and Imperial Valley Volkswagen this year we will be at all the races.” Scott was moved from first to second, and lost his finishing points over the fuel issue. Like he said; rules are rules. 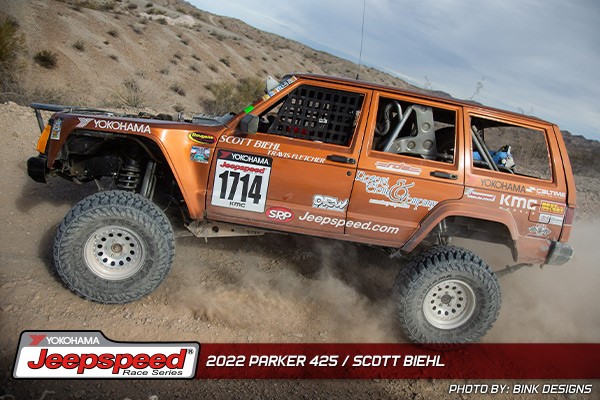 Scott Biehl battled with Steve Palmieri all day. “It was a great race, we were neck and neck all day,” says Steve. “He caught us quick at about mile 10 in the rock garden. We caught him back in the sandy wash around mile 80. We got to mile 112, and had an oil cooler come loose so we got passed back when we stopped to fix it. It was real fast running all day. I have run that race so many times in the opposite direction that my mind was messed up all day. I had no idea where I was most of the time. These short wheelbase Jeeps usually have on side in the rut, and the other riding on the berm in the center. You end up popping around all day, it gets sketchy. We had no other troubles, and no flats. My brother in law does a lot of the prep so he gets the credit along with the crew. One thing about desert racing is that it’s a team win. Nobody is more important than any other.” 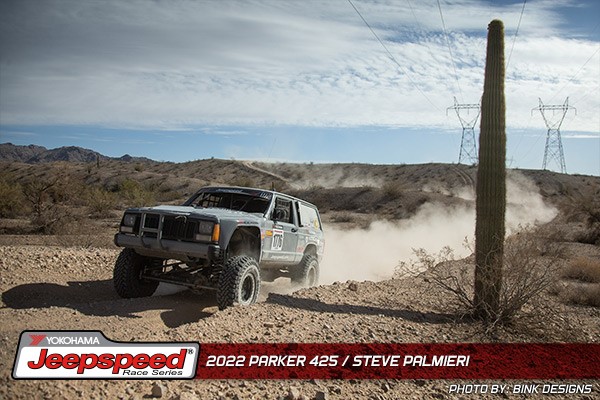 In the Jeepspeed Outlaws class, Jerry Simonson took the win. He finished the course in a little over 6 hours. “My son Kyle Quackenbush, and I started the race; we ran the first lap,” said Jerry. “Our Jeep, AKA the Sexy Beast, was running great.  My brother Dan Simonson, and Stan Pier drove to pit 3 where we switched out. My wife Kathy Simonson and son Travis Quackenbush finished the race. The Yokohama tires are amazing. Green City Heating and AC has been there helping us keep the Sexy Beast running strong. It was a great day! Thanks go to all our family & friends that help at Simonson Racing.” 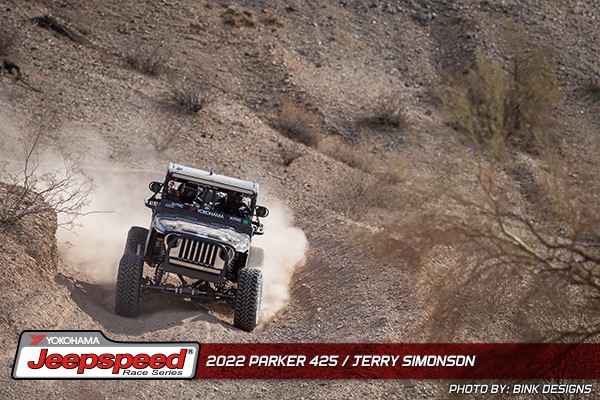 Garett Allred took another win at Parker in the Jeepspeed Trophy Class. “I thought it was going to be exciting going backwards; it was weird going that way,” said Garett. “It turned out to be super smooth; the smoothest Parker ever, but it was fun. At mile 50 I noticed the volts on the gage started dropping. I called for an alternator change at pit 2, but they didn’t have one when we got there. With 40 miles to go to the main pit we had only 8 volts showing even though we shut just about everything down. We made it on only 5 volts. We found out that the charge wire had gone bad. We run a carburetor so we only needed to supply the fuel pump, and not a computer. I had covid before the race so we had no time to test before we got there. We ran right up into the class 8 trucks, and it was fun racing with them. I was having fun picking them off, and hoped the truck would not shut down due to the electrical problem after making all those passes. After the repairs in main pit I turned the truck over to a friend who used to be my co-driver. He had such a good time he is joining our team and helping out with expenses. It was a fun, zero stress day, and we came out with the points lead going into Silver State. It felt great to be back in the driver’s seat.” 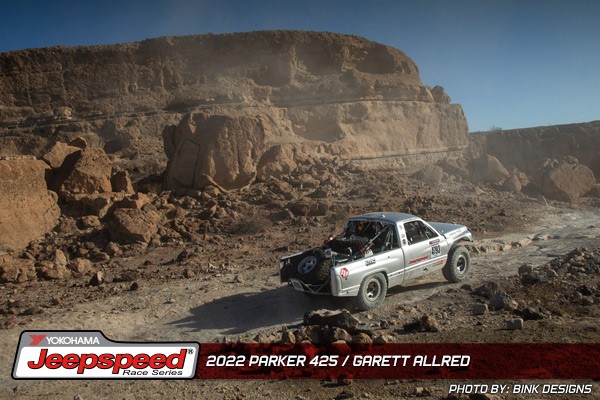 Win or lose, everyone was put to the test, and had something to be proud of. Work is already underway for the next Jeepspeed race, the Silver State 300 on April 28th to the 30th. The course is a favorite among drivers. Festivities take place in Las Vegas, and the course is up around Alamo, Nevada. Think you would like to give Jeepspeed racing a try? For information about the Jeepspeed racing series go to www.jeepspeed.com. There you will find additional info, deals on some attractively priced race Jeeps, Jeepspeed news, rules, race results, videos, and much more.

Find us on Social Media!